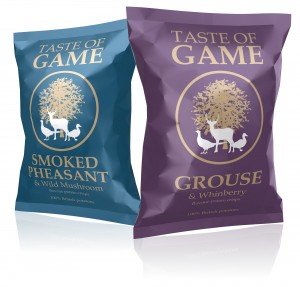 Taste of Game has launched two innovative premium crisp flavours at this year’s CLA Game Fair to promote the tastes of game to a wider audience.

Crisps are an ideal way of introducing consumers to new tastes – over six billion packets of crisps are sold in the UK each year.

The crisp packaging highlights the important link between game and conservation: The Grouse & Whinberry packs carry the message “Managed heather moorland is home to the red grouse. 75% of the world’s heather moorland is found in the UK. It’s rarer than rainforest.”

The Taste of Game crisps are made from 100% British, home-grown potatoes and are sliced with their skins on and batch-cooked in award-winning cold pressed rapeseed oil. Rapeseed oil contains 35% less saturated fat than sunflower oil.

The crisps come in 40g packets in single flavour boxes of 24 and have a three-month shelf life. They can be ordered from the Taste of Game website at www.tasteofgame.org.uk

Taste of Game is encouraging people who try the crisps and like the flavours to help introduce the taste of game to as wide an audience as possible by recommending the crisps to pubs, restaurants and hotels.

Annette Cole of Taste of Game said: “While game is becoming increasingly popular, it can still be difficult to get some consumers to try it for the first time. We are keen to make the taste of game more accessible and that’s where these delicious crisps come in.”