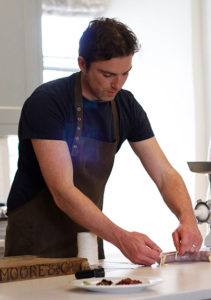 The Guild of Food Writers Recent Visit to Suffolk for a Wild Version Workshop with The Wild Meat Company and a Venison Cookery Masterclass with Gill Miller.

On March 21st, members of the Guild of Food Writers made the journey to Suffolk at the invitation of the Wild Meat Company (WMC) at Blaxhalll, nr Woodbridge, to learn about the provenance, sourcing and butchery of local wild Fallow venison.

The workshop, was designed to highlight the importance of controlling wild deer in the county, to manage the population, to help protect crops and utilise the carcasses as a fully sustainable and traceable source of wild, lean meat. WMC produces all seasonal wild game products during the year, but venison enjoys a much longer season and therefore can be sold over a more extensive period.

At the Blaxhall cutting plant, the members were treated to a butchery demonstration involving the preparation for sale, of a whole Fallow carcass. Master butcher Paul Denny showed how the animal is cut into the various joints, each for a different culinary purpose. Robert Gooch, co-owner of the company described how the animals live in the wild and arrive at WMC having been hunted and delivered in a traceable and audited trail, by certified deer management specialists.

Following the tour of the WMC, the group made its way to the historic Bruisyard Hall, nr Saxmundham, where they enjoyed a venison cookery demonstration, followed by a magnificent four course lunch of wild fallow venison, prepared, cooked and showcased by Gill Meller, using recipes adapted from his recent debut cookbook “Gather”. 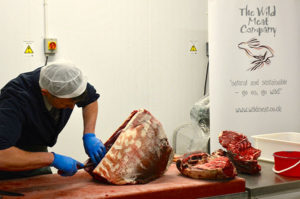 Assisted by local chef Peter Harrison, Gill, of River Cottage fame, produced three courses of venison; tartare, with roasted oysters, seared loin steaks with shaved cauliflower and paprika and venison stew with nettle dumplings. During the cookery demonstration Gill also showed how to make venison salami, of which each writer took a sample home, to cure at their leisure.

Robert Gooch described the day as “a perfect example of how to indulge in the whole concept of eating wild venison.”

He added, “From field to fork, we were able to trace the journey that an animal takes from slaughter to the production of ethically reared and wonderfully flavoursome meat. Gill then demonstrated the exceptional versatility of the product, with some simply stunning recipes that he delivered to perfection. It was a remarkable day.”