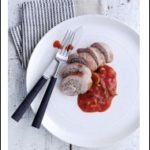 A delicious dinner party dish with most of the preparation done in advance...