Michelin-starred chef cooks up rabbit dish for Taste of Game

Franceso, chef patron at Sartoria, in London, frequently appears on popular television cookery shows – including the BBC’s Saturday Kitchen and MasterChef – and is considered one of the capital’s leading chefs. 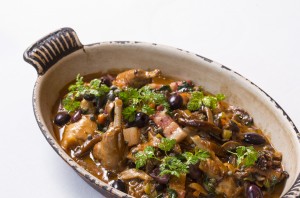 Annette Cole, Taste of Game development manager, said: “It is great to see accomplished chefs working with game and cuts that people often don’t know how to cook. This recipe is easy to cook at home. But it will impress, it is absolutely delicious.”

Rich and hearty, this ‘hunter-style’ Italian stew is often made with chicken, but Francesco celebrates the wonderful taste of British game meat by choosing the subtle flavour of rabbit. Cooked with earthy wild mushrooms and salty pancetta, Francesco adds a little extra Italian flair with capers and juicy olives scattered over the top.

Francesco features on the Great British Chefs website (www.greatbritishchefs), which is described as a go-to destination for food-lovers in search of recipe inspiration, technical expertise and restaurant news and reviews.

The recipe is available here: http://tasteofgame.org.uk/rabbit-cacciatore-by-francesco-mazzei/