Great British Food Gets My Vote

Taste of Game is getting behind and supporting the NFU’s new national campaign to highlight the importance of food and farming ahead of the general election. 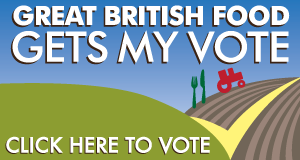 The “Great British Food Gets My Vote” campaign, to be launched at the NFU’s annual conference on Tuesday 24th and Wednesday 25th February, will urge politicians to back British farming in their manifesto, and ask the British public to continue buying British food and supporting British farming.

As part of the campaign, the NFU is taking out adverts the national newspapers and farming publications to highlight the importance of British farming and food production to the country.  Farmers are also being encouraged to invite their local MP onto farm.

Over 200 NFU members have already signed up to receive and display 3metre x 1metre banners with the campaign title “Great British Food Gets My Vote”. In addition to this, campaign window stickers will be distributed to 50,000 members in the next edition of the NFU member magazine British Farmer & Grower.

NFU President Meurig Raymond said: “With less than three months before the general election, British agriculture and the future of domestic food production must be recognised as a hugely important issue for Britain as politicians battle it out.

“Before the campaign has launched, we already have hundreds of our membership interested in playing an active part. Farmers on the ground are behind what we’re doing with this campaign, which shows the sheer importance of our lobbying.

NFU Deputy President Minette Batters said: “It is so important that food and farming is recognised for the key role it plays, not only in producing food but in its contribution to the country’s economy, in creating jobs, as well as the rural landscape that attracts millions of tourists every year.

“We know people care about farming – you only have to look at the recent dairy crisis to see people really wanting to help solve the current crisis. People realise it takes years of commitment, on-going investment, time and care to rear good quality beef and dairy animals; plant, nurture and harvest crops; protect soils and manage land. This is a long-term business that needs long-term thinking from the next Government.”