Taste of Game, which helps promote the delights of eating game meat, has published “Glorious Grouse” a short guide on where to buy the king of game birds. 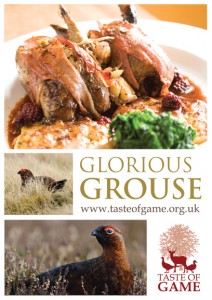 Publication coincides with “The Glorious Twelfth”, the 12th August, the start of the grouse season. On the 12th, Restaurants in London will compete to be the first to serve grouse on the day. But you don’t have to visit a restaurant to enjoy the delights of grouse. As Annette Cole, Taste of Game Development Manager, says “Grouse can be easily bought and cooked at home”. The Guide lists numerous outlets around the country where grouse can be bought, often online.

The red grouse Lagopus Scotica is unique to the British Isles which also has the majority of the world’s heather moorland, the internationally protected habitat in which grouse thrive.

Annette Cole said: “The guide includes a few recipes which you can try. If you’re looking for a treat and want to eat seasonal, low fat, natural and wild game then you must try grouse. Some consider it the best of all game birds for taste. There’s little that beats traditional roast grouse served with bread sauce, game chips, watercress and redcurrant jelly – a real taste of the late British summer and early autumn.”

The guide can be seen here.