This recipe is a bit time consuming, but looks very pretty when served and is well worth the effort.

You will need a 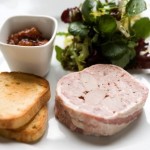