Jonathan Ferguson, Chef de Partie of Restaurant Andrew Fairlie at the Gleneagles Hotel has been crowned Game Chef of the Year 2018. 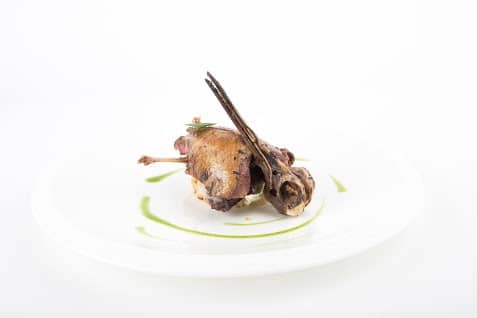 Now in its seventh year, the prestigious competition involves a nationwide search to find the best upcoming, professional game chef with entrants from all over the UK. 10 chefs from across the UK took part in a cook off on Monday 29th January at Braehead Foods in Kilmarnock, in association with specialist venison producer Highland Game.

Each finalist had to prepare two game based dishes, one starter and one main course for the panel of Michelin star judges: Paul Gayler MBE, Shay Cooper, Ian McAndrew and Nick Edgar.

Barry Gamble, Head Chef at Chelsea Market, Glasgow and Allesandro Panella, Junior Sous Chef of One Aldwych, London were named as runners up.

The judges were impressed with the excellent quality and standard of dishes on offer from the finalists, but Jonathan’s entry stole the show. He served a starter of roast woodcock on a brioche crouton with a mustard brandy sauce and main course of roast loin of roe deer, red deer ossobucco, celeriac and preserved elderberry.

All 10 finalists each received £100 cash and Jonathan will also have the chance to enjoy a trip to Sweden to hunt wild boar.