Be a judge at the British Pie Awards 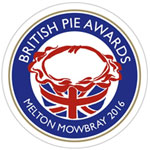 Would you like to be a judge for the day at the British Pie Awards?

Then enter our fantastic competition to do just that.

The British Pie Awards take place on 9th March 2016 at Melton Mowbray and you could join Taste of Game Development Manager Annette Cole to judge the Speciality Pie section.

Travel costs up to £150 are included and can be claimed with evidence.

The world-famous Awards, which are to be held on 9th March 2016 in the Leicestershire town of Melton Mowbray, are in their eighth year. The hotly coveted contest continues to grow in popularity, with last year’s Awards seeing a staggering 830 pies entered from 131 professional bakers, butchers and chefs – judged by 109 pie aficionados.

The Awards celebrate our nation’s love of pies – be they hot or cold, sweet or savoury. A few simple pie rules must be adhered to though: all pies are to be totally encased in pastry with a closed top, and fit into one of the pre-assigned classes.

For the 2016 Awards and in celebration of HM The Queen’s 90th birthday – bakers, butchers and chefs are invited to create a pie ‘fit for Her Majesty The Queen’.

To enter the draw just answer the following question

Competition rules
-A day’s judging of the British Pie Awards
-Costs of travel up to £150
-Competition is a free draw which will be drawn at random by computer generated numbers.
-Opening date 8th February 2016
-End date 2nd March 2016
-Restriction to entry e.g. only open to UK residents aged 18 and over
-Promoter Taste of Game
-Winner will be notified within a week of closing date by email.
-Prize must be claimed within 2 days
-Winner will be announced via Twitter and Facebook – Taste of Game
-Employees and contractors (and their respective families) of The Promoter (including any group companies) are not eligible to enter.
-No responsibility is accepted for entries which are lost, corrupted, incomplete or for any failure to capture entry information
-Entrants are required to meet the Entry Criteria but otherwise no other purchase is necessary.
-It is the responsibility of entrants to notify the promoter of any change of contact details. Proof of identity may be required.
-No responsibility is accepted for entries which are lost, corrupted, incomplete or for any failure to capture entry information. Use of false details will result in disqualification. The entry must be made by the person entering the competition – entries sent through third parties, agencies or by automated means (such as scripts and macros) will not be accepted.
-The promoter will have the right to publicly disclose the name of the winner(s)
-The promoter reserves the right to provide a substitute prize of similar value should the need arise. The payment of all costs and expenses involved in claiming a Prize are the responsibility of the winner(s) apart from travel costs up to £150
-If the potential winner cannot be contacted or the Prize notification is returned or is undeliverable, such potential winner forfeits all rights to any Prize, and an alternate winner may be selected. An unclaimed Prize may not be awarded. The Prize is non-transferable and no cash alternative is offered.
-Entry implies acceptance of these terms and conditions as final and binding. Entries which are not in accordance with the terms and conditions will be disqualified.
-By entering you are allowing Taste of Game and the British Pie Awards to contact you with information and marketing.