Pheasant on the school menu is a ‘Game Changer’

Pheasant on the school menu is a ‘Game Changer’

A project to teach 60,000 students to cook game by 2020 has been inundated by requests for sessions with schools since its launch in the summer.

Taste of Game and The Food Teachers Centre launched the “Game Changer” initiative in June and it has already engaged with more than 200 schools.

Annette Woolcock from Taste of Game said: “We are so excited about this project; the engagement and enthusiasm from the schools has been incredible. 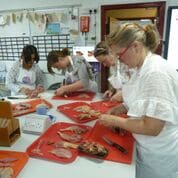 “It is lovely that a new generation will understand game and know how to cook it. I would also like to say a huge thank you to the game dealers and shoots who are donating pheasants to their local schools. The project would not be a success without them.”

This month, a student masterclass was hosted in Exeter as part of British Food Fortnight. This included a demonstration in preparing pheasant and making pheasant breast bruschetta to 20 Year 10 students. This was followed practical cooking sessions for 100 students throughout the day.

Louise Davies from the Food Teachers Centre said: “Food teachers are very excited to be offered practical training and student masterclasses. It fits perfectly with the new exam courses, where students have to demonstrate high-level skills, such as preparing meat and where they are expected to understand how animals are reared and prepared.

“It also educates young people about the contribution of seasonal, local and nutritious foods to modern and traditional British cuisine.

“In the past, a lack of ingredients prevented students from cooking game. So this programme will hopefully mean that thousands more youngsters will get to cook with it, and get the chance to try some new recipes.”