Game gets put firmly on the menu at local cookery school

Game gets put firmly on the menu at local cookery school

Exeter Cookery School, the new culinary hotspot that opened on the city’s 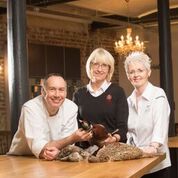 picturesque quayside this summer, is opening its doors to the public on Sunday 20th November for a free event to herald the start of British Game Week (21st-27th November). The Game Awareness Day, which runs from 10am to 4pm, is aimed at promoting the use of game such as wild rabbit, pheasant, partridge and duck on the menus of local restaurants and equally with home cooks.

Hosted in collaboration with Taste of Game, the event will feature an exciting line up of cookery demonstrations and tasters as well as providing people with key information on the benefits of eating more game, both in terms of the environment and health benefits.

Annette Cole from Taste of Game says: “Game meat is wild and natural, part of our countryside harvest.  It is part of our heritage but is also a vibrant and a modern addition to today’s lifestyles and food choices. We are delighted to mark the start of British Game Week at the smashing new venue at Exeter Cookery School.”

Jim Fisher, co-founder and head chef of Exeter Cookery School, says: “Having run a successful cookery school in the Dordogne for 15 years, we are passionate about cooking all manner of game dishes, with duck being a particular favourite.

“As well as looking at the different types of game, we will be bringing together some of the South West’s finest game producers. From pies to pasties and from charcuterie to sausages, with plenty to entice even those who have never tasted game before.”

The event will also provide ample inspiration for those looking to cook more wild game, which offers additional health benefits when compared to meats from domesticated or farm-raised animals – the meat has a naturally lower fat content due to the fact that wild game animals eat their natural diet and are very active in the wild. For anyone wishing to learn even more, Exeter Cookery School will also be letting visitors know about the launch of its first one-day, hands-on game cookery course taking place in January.

There is no need to book for Game Awareness Day, just head along to Exeter Cookery School – located next to AS Watersports just off Piazza Terracina – between 10am and 4pm on 20th November with friends and family to enjoy some sensational seasonal treats.